The Great War Theatre project, through the AHRC-funded WW1 engagement centre Gateways to the First World War,  has worked with a range of community groups and individuals exploring theatre during the Great War. A couple of examples of this work are shown below. To find out more about how we can support your project or research contact us. 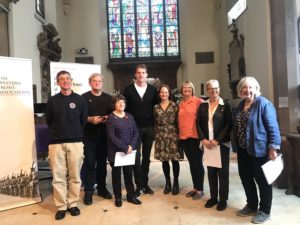 The Western Front Players is a community theatre group made up of members of the East London Western Front Association. It developed after two of its members volunteered for the Great War Theatre project and wanted to take their research further by performing some of the plays they had come across. After staging a number of these plays, the group volunteered to perform a rehearsed reading of Tommy-by-the-Way for an AHRC documentary on the engagement centres presented by Dan Snow and being produced by History HIT TV. The full documentary, Untold Stories of World War 1, can be found on YouTube here.

Between 2016 and 2017, the Great War Theatre project, as part of Gateways to the First World War worked  with the Kings Theatre, Southsea on the project ‘Theatre of War’. Gateways Co-investigators Professor Brad Beaven and Dr Helen Brooks and Dr Mel Bassett (University of Portsmouth) worked with Katrina Henderson from the Kings Theatre and the theatre’s project volunteers. With help from this team, the Kings Theatre won £9,900 from the Heritage Lottery Fund First World War: Then and Now scheme. With funding and support, the theatre produced a multi-dimensional project which culminated in a gala where local school groups showcased a documentary they had made, youth groups performed devised work about the war, and a local theatre group premiered full-length production of The Lads of the Village.